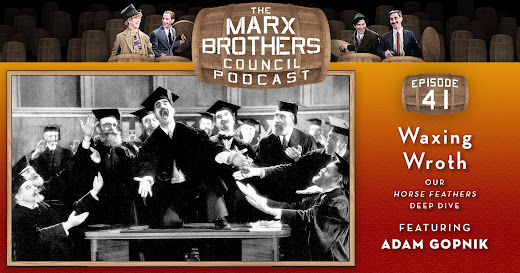 Listeners to the podcast, podcast listeners, readers of the blog, and blog readers -- I guess that covers everything -- we have one of our epic deep-dives for you this month. The subject is the great masterpiece Horse Feathers, and the guest is the great essayist Adam Gopnik, whose most recent Marx-adjacent project is the new Library of America S.J. Perelman anthology. Where's the seal? Where's the seal? Where's the seal? Where's the seal?
Official description: "Adam Gopnik, New Yorker writer and editor of S.J. Perelman: Writings, joins us for an exhaustive look at the Marx Brothers’ 1932 classic, Horse Feathers.
"Adam discusses Perelman’s influence and tries to pinpoint his specific lines, Noah is skeptical that Horse Feathers owes anything to the brothers’ vaudeville school act, Matthew keeps track of the differences between the film and shooting script, while Bob constantly derails the conversation with trivial observations.
"Singing the film’s praises, we can’t help but lament the mangled version history has left us with…we talk about what’s missing and why. We also touch upon Chico’s limp, Thelma Todd’s traveling birthmark, and how Harpo isn’t a mime at all.
"Discussion more than twice the length of the movie with 1/10th the entertainment value!"
Note for early birds: When a new episode is released, it might not appear at all of the locations below right away. If you visit your favorite podcast provider and the previous episode is still the most recent one you see there, be patient! And above all, don't worry.