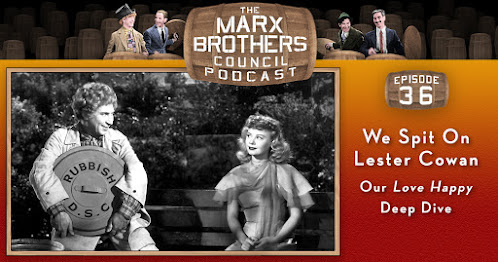 Well, you should have known we'd do this eventually. Please join us -- we're begging you -- for a discussion of the universally beloved classic Love Happy. It may not be everyone's favorite Marx Brothers movie -- it may not even be a Marx Brothers movie -- but you have to admit, it is a movie.
Official description: "DISCLAIMER: Since producer Lester Cowan defied contractual agreements and billed this as starring 'The Marx Brothers,' we are obligated to do an episode about it.
"The brothers search for jewels as we search for laughs…and though it’s not top-tier Marx, there is still plenty to enjoy as well as plenty to ponder. Matthew tells how Chico was the first to agree to appear in a Harpo solo film, Noah is baffled by how the jewels got into a sealed sardine can, and Bob goes off on Marilyn Monroe.
"You’ll learn about the two versions of the film, and why the shorter, less funny one is most likely what you’ve seen. You’ll learn why Groucho and Chico never appear onscreen together…but you won’t learn what those penguins are saying.
"Seriously, it’s not a bad film…wish we could promise the same about this podcast."