Episode 9: A Good Buy From MGM 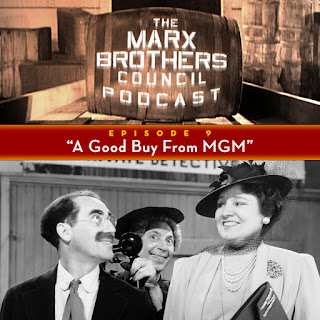 Why, we didn't know you cared! But since you do, here's our ninth episode, in which friend-of-the-podcast and Council stalwart Nick Santa Maria drops by to discuss The Big Store, which we all agree was made by MGM in 1941 and stars the Marx Brothers and Tony Martin.

Episode Description: "Actor, writer, and singer Nick Santa Maria joins us to defend The Big Store…not the funniest of the latter-MGM films, but (in our opinion) the most likable. We speculate on the secret life of Hiram Phelps and love life of Mr. Grover, plus hear a rare audio clip of Tony Martin and his version of reality. We're also treated to the death stories of a couple of cast-members! Finally, everyone is rewarded by us not playing 'The Tenement Symphony.'  Note that your enjoyment of this episode will be greatly enhanced by watching the film first, as we get into detail that you might not remember..."

This episode's end music is Nick Santa Maria's sweet rendition of "If It's You," by Ben Oakland, Artie Shaw, and Milton Drake, featured in The Big Store.

Get your copy of The Misadventures of Biffle and Shooster, featuring Nick, right here!

And here's MGM's original trailer for The Big Store, referenced in our episode title:

And there you have it, folks! As always, you can find us everywhere on the web, and join us in the Marx Brothers Council Facebook group to discuss this episode and all other Marxian matters.