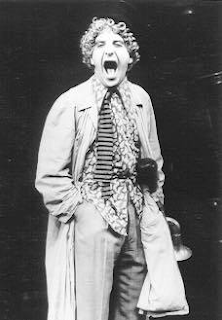 And we're back, with a little something extra. You will recall that Episode 4 of the Marx Brothers Council Podcast included an excerpt from Noah's recent interview with masterful Marxian revivalist Les Marsden. As soon as it was released, adamant crowds gathered at our doors to demand that we release the interview in its entirety. Not ones to say no to an angry mob, we're pleased to present the whole strange interlude, as a bonus episode, right now.

"The full-length interview with actor / musician / writer / director Les Marsden, who has portrayed three of the brothers onstage, in addition to writing and starring in the one man show A Night at Harpo’s. Among the topics Les discusses with Noah are audience expectations, learning to play the harp, pitching the one-man show to Harpo’s widow Susan, and his encounter with Groucho. End Music: 'Why Am I So Romantic?' (from Animal Crackers), as performed by Les Marsden."